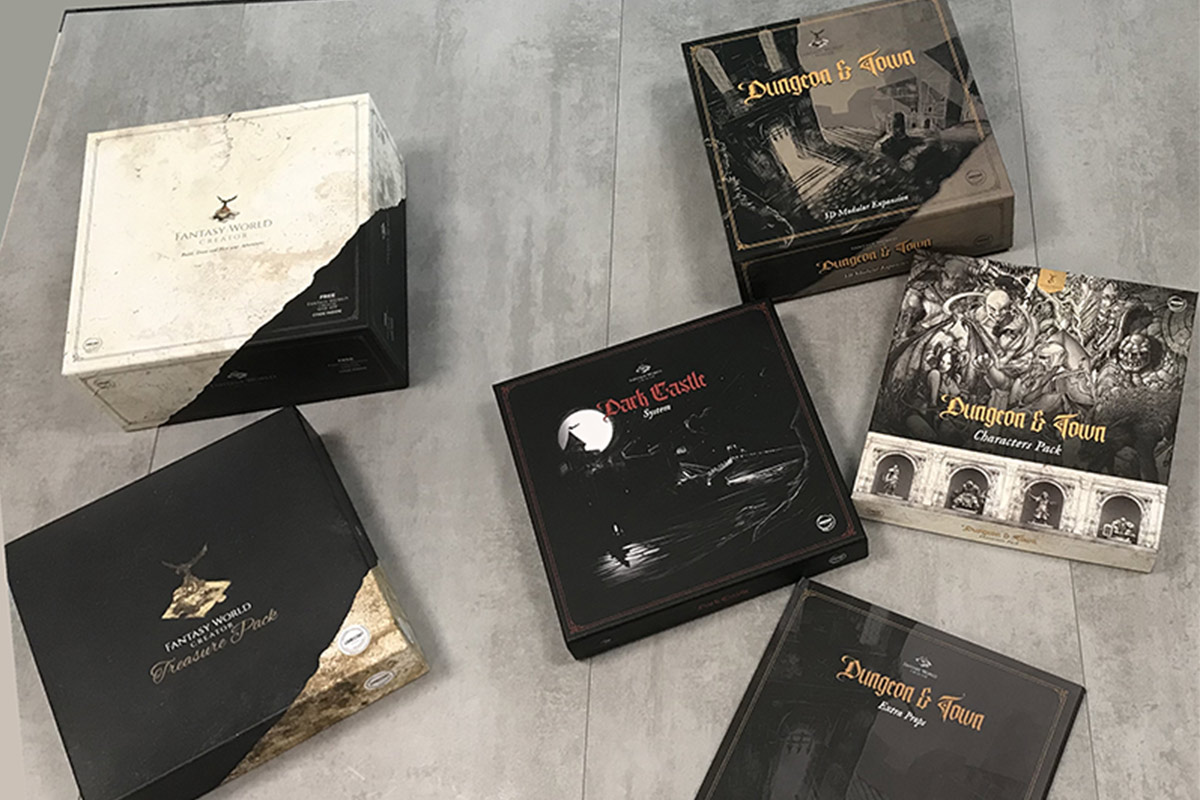 We haven’t played role-playing here at Gamestart for a while. So we decided to embark on the adventure of the “Dungeon of the Mad Mage” published by Wizard of the Coast and play it using everything available in the bundle “Fantasy World Ruler” that many of you have purchased.

Our heroes, Ulrick the barbarian, the cleric dwarf Torek, the summoner Maul and the ranger Ivydriel, are about to enter the inn from where they will descend dungeon.

To simulate the two levels required by the map, we used an AdapTableTop module that was “dressed” with RPG thematic legs for the occasion.

The players are ready! Each character has his interactive equipment sheet in which to fit objects in his possession.

The beggar at the entrance is a classic that could not be missing.

The inn interior has been reproduced as described in the manual: there is the innkeeper behind the counter, the waiter and the tables, a fireplace and the well in the center that leads to the dungeon entrance, and non-playing characters with their quests.

And here is the Master’s position, a part of the dungeon hidden behind a secret passage is ready to be placed in case it is discovered.

The NPC’s details are noted in the dedicated Master’s Black Book chapter.

The Master’s Black Book can keep tracking of the Characters’ alignment. In this way, you can understand in every moment how the world reacts to the player choices.

After talking to everyone (including Volo, of course), it’s time to dive into the well and start the adventure!

To speed up the game setup, the Master decided to build the dungeon first and then cover it with other tiles; in this way, nothing will be revealed if not a little at a time!

Maul guesses  that the skeleton is pointing to something… but fails the roll to find it. The secret passage remains hidden for now. All that remains is to continue. (Please notice how “dark” is the dungeon under the tiles roof! We love this)

Ulrick controls the statues and accidentally makes noise! Two Bugbears ambush them and catch them off guard!

Combat can be managed in different ways thanks to the combination of FWC and MBB; here we used our favorite: combat rounds on the book and cards with statistics to keep track of the order of initiative, wounds, and bonus-malus.

Players can instead take advantage of the practical rewritable mini cards to avoid having to erase often on the player’s sheet.

How will the fight end? Will the enraged barbarian manage to kill the Bugbears before one of them notices the gang of Goblins at the end of the left tunnel?